It practically never rains during this season. However, there are sometimes sand storms.

The average temperature during winter (December to February) is 55.4°F (13°C) with minimums of 42.6°F (6°C). When the sun is out you can explore the city in a t-shirt or a with a thin jumper, but at night the temperatures drop drastically, so you should also take a jacket with you. Marrakech has relatively wet winters, so it might be a good idea to bring an umbrella just in case.

Marrakech in spring and autumn

The best months to explore Marrakech, in our opinion, are March, April, October and November. During the day you will probably be a little hot, but it is not uncomfortable to visit the city. At night, the weather averages are very enjoyable.

The official currency of Morocco is the Moroccan Dirham, designated by Dhs or MAD. The plural form of Dirham is darahim, although in English “dirhams” is widely accepted.

Each dirham is made up of 100 santimat. 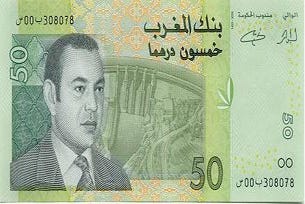 Banks and cash machines are found throughout the city, but the easiest places to find them is in the city’s main square Jemaa el-Fnaa and in Gueliz, the new part of Marrakech.

The best way to save on commissions is to pay whenever possible with your credit card. If you pay by card the exchange rate is less and, depending on the issuer of the card, the maximum fee is 1%.

Where to exchange currency?

Although you can pay in euros or U.S. dollars in most shops and restaurants, merchants will always try and convince you that the exchange rate euro/dollars to dirhams is favourable to them. Thus, we recommend paying by debit or credit card whenever possible, and if it is not, to pay in dirhams.

Owing to the importance of the tourism industry in Marrakech, some riads only accept euros.

Morocco’s official spoken language is Moroccan Arabic, which is slightly different from other forms of Arabic. Nevertheless, thanks to its varied historical influences, part of the population also speaks French.

Those working in the tourism industry normally also know English and Spanish. Moreover, English is quickly replacing French as the country’s second language.

You will find that most people you encounter during your stay will speak English,if you do not speak French; therefore, you needn’t worry about being understood in Morocco.

Even though you do not have to make much effort to speak Arabic in Morocco, here is a list of useful phrases, as it is always welcome when foreigners make an effort to speak the country’s language.

It is customary to leave between 10 and 15% tip in restaurants. If you take a taxi and the driver has put the taximeter, you can also give a 10% tip.

Haggling is part of the  way of life in Marrakech, like in the rest of the Arab World. You will have to haggle and bargain (whether you want to or not) in the Medina’s souks, shops, with taxi drivers…basically everywhere except for restaurants.

Any cookies that may not be particularly necessary for the website to function and is used specifically to collect user personal data via analytics, ads, other embedded contents are termed as non-necessary cookies. It is mandatory to procure user consent prior to running these cookies on your website.